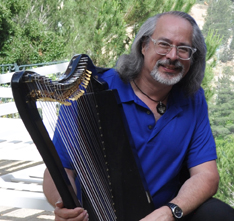 Michael-David
Inventor of the Harpella TM and President of Harptronics Inc.

Michael-David is the author of a new book “The Frequency of the Supernatural”. He is an inventor, composer/producer, prophetic harpist/psalmist and Renaissance man. With a lifelong passion for technology, astronomy, and quantum physics, he merges these fields with a love of music and God. His patented electronic harp called the Harpella has taken him around the world in prophetic harp music.

Michael-David, is a Psalmist who leads worship and holds harp schools internationally. He has a calling to help restore the harp as a prominent instrument for worship and prayer. He is the founder of the School of the Prophetic Harp and has given instruction in Davidic Psalmistry in Israel, North America and around the world.

Michael-David and his wife Zsiporah are a Messianic couple who have ministered in music for over 30 years with a distinct Hebraic emphasis. They have appeared on Canada’s #1 daily Christian TV program 100 Huntley Street on a number of occasions and in Israel at the ICEJ Feast of Tabernacles before thousands of international visitors and delegates as well as ministering at the All Nations Convocation with the Jerusalem House of Prayer For All Nations for multiple years.

As a harpist, composer, and producer, Michael, along with his wife, who is an author and singer, have produced original musicals including The Feast of the Ages (available on DVD) and A Camelot Christmas Tale that has aired across North America. They are also credited as Executive Producers for a number of feature-length films in conjunction with CubeCity Entertainment.

The video clips below are endorsements for the Harpella by Cindy Jacobs and David Van Koevering as well as an explanation by the inventor.

Above is a link to a short video introducing you to the life and ministry of Michael-David and Zsiporah (2min 14 sec).  (Above)

Lord of the Harp – This song is sung as if God Himself were singing that He is the “Lord of the Harp”. (Zephaniah 3:17) It was composed by Michael-David and it pours out a revelation of the mystery of the harp that is around the Throne of God and how the harp is currently being restored as an instrument of worship and prayer.

In a World That Needs Jesus – Here is a song that was given to Michael-David all in one moment as he was playing his harp on the side of my bed. It seems so appropriate for this time in history. It will point you to the one place of comfort… the one name give under heaven and earth through which mankind is to be saved – the name of Jesus

This concept music video was composed and produced by Michael-David and was shot during the total eclipse of the “Blood Moon” in Jerusalem, Israel, September 2015. This song is available as a bonus track on the CD “Chrysalis” at www.propheticharp.com/bloodmoon (Above)